Difference between revisions of "MagnaGarurumon"

MagnaGarurumon is a Cyborg Digimon and Mega-class Hybrid Digimon whose name and design are derived from "Magna" (Lat: Great) and Garurumon. It possesses power over Light which is said to have surpassed even the might of the legendary Ten Warriors. It specializes in moving at light speed, and when its aviation unit is equipped it is able to fly at subluminal speeds. Also, its chest armor, its long-range firing "Sniper Phantom" on its right arm, and its mid-range firing "Strike Phantom" on its left arm are capable of being detached, although this decreases a portion of its firepower. By spinning at high altitudes, the "Laser Sights" on its chest are capable of locking onto all anti-air and anti-ground targets, so as soon as it spins at spins at an extremely high altitude and confirms its targets, it commences a full-scale attack. It seems that it's already too late to escape from Magna Garurumon. Its Special Moves are conducting a simultaneous firing of all its guns at all the locked-on targets, then violently pulverizing the main target at high speed (Machine Gun Destroy), and after detaching its chest armor, accelerating to speeds that exceed the subluminal and reach the superluminal level, then erasing everything that comes in contact with any of the bands of light (Starlight Velocity).

MagnaGarurumon was added to Korean Digimon Masters on October 6th, 2015.

MagnaGarurumon was added as a Mercenary Digimon to gDMO with the August 9, 2016 Patch. 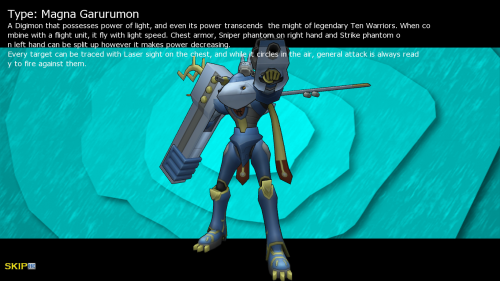