Difference between revisions of "Lucemon"

Lucemon is said to have descended to the ancient Digital World long ago, it is an Angel Digimon which has the appearance of a child. It manifested in an era in which the Digital World was still chaotic, and it is said that it brought about order and harmony. However, because of a later "Rebellion" against Lucemon, it summoned a long period of darkness. Although it has the appearance of a child, the power and intelligence it possesses surpass even that of a Perfect Digimon. It is said that Lucemon's abilities have now been inherited and split among the Three Great Angels. Its Special Move is firing ten super-heated spheres of light arranged in a cruciform syzygy (Grand Cross). This technique possesses a power surpassing that of Seraphimon's "Seven Heavens".

Lucemon was added to Korean Digimon Masters on September 17th, 2013.

Lucemon was added as a Mercenary Digimon to gDMO with the September 24, 2013 Patch.

Note: In GDMO The F1 And F2 attacks are opposite to those of the KDMO version.

"Once upon a time, The Digimon who looks like a baby angel descended to the ancient Digital-World. It was said that the digimon appeared to bring order and peace to the World while The Digimon World was still chaotic." 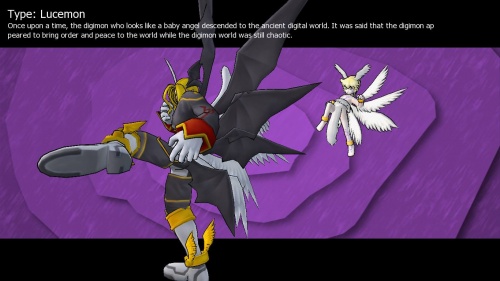