Armadillomon is a Mammal Digimon whose name and design are derived from the armadillo. Its body is covered in a hard shell. It has a carefree, charming personality, but occasionally gets hurt if it gets carried away. Just like Veemon and others, it's a descendant of a special species that flourished in ancient times, so it's able to unleash the power of the "Digi-Eggs" to digivolve with an Armor.

A mammal type Digimon with a hard shell covering the body. It has a carefree and bright personality, but gets explosive power when the armor evolves. It ultimately evolves ito a Vikemon. 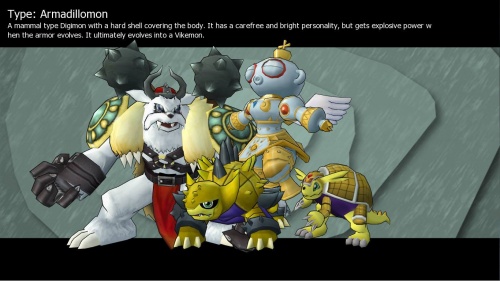