Wormmon is a Larva Digimon whose name and design are derived from the bagworm moth. It has a timid, cowardly personality. Just like Veemon and the others, it's a descendant of an ancient species, so it is able to perform special Armor Digivolutions, but since Wormmon is powerless when by itself, it can't possibly match up to larger Digimon. However, by Armor Digivolving with the power of the DigiEggs, it is able to manifest unbelievable power. Also, it is said that in order for the fragile larva to grow into a powerful imago, Wormmon will one day evolve into a Champion overflowing with power. You can definitely say that it is a Digimon who has hidden potential for the future.

Wormmon was added as a Mercenary Digimon to gDMO with the May 16th, 2012.

A shy and timid Larva type Digimon. Its an descendant of an ancient clan, like Veemon. Its armor can evolve. It has the potential to be a great Digimon. It will evolve into GrandisKuwagamon. 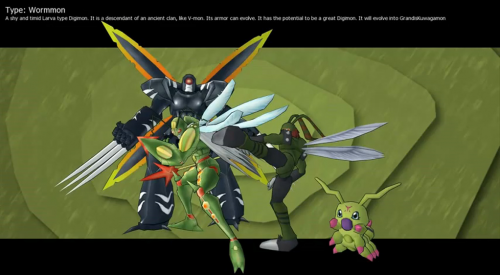 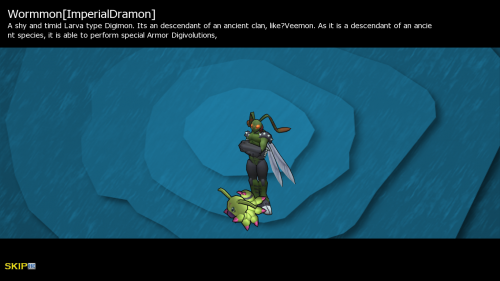