Terriermon is a Beast Digimon whose name and design are derived from the Terrier dog breed. It is an extremely precious Rookie Digimon that is a twin to Lopmon. While Terriermon has only one horn growing from its head and has a calm but robust personality, Lopmon has three horns growing from its head and has the personality of a lonely crybaby. It is a Digimon shrouded in mystery, and it can be classified as a Beast-species Digimon from its body structure, but it's still not understood what kind of digivolved form it will take on. Also, it is rumored that it is sometimes born with its twin. It's a very cute type of Digimon, and from its calm behavior it doesn't seem like a "Combat Species", but when battling, it shows that it is more powerful than it appears

A healthy Digimon with an easy-going nature. This Digimon uses its ear, which is split into three branches, as a hand. Ultimately, it will evolve into MegaGargomon, a Machin type Digimon with an endless supply of concealed weapons. 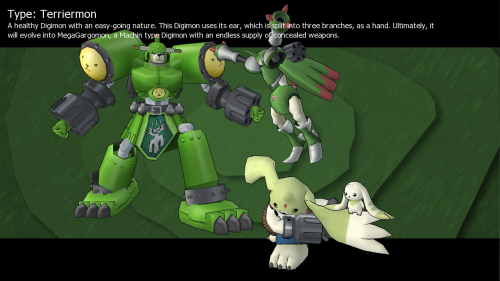