Tanemon is a Bulb Digimon whose name and design are derived from the seed (種 Tane). It has something that looks like a plant sprout burgeoning from its head. It is a Yuramon that wandered in search of an optimal environment, then settled to the ground and Digivolved. Due to its extremely timid personality, if it senses an intruder's presence, it will burrow with the four feet at the base of its body, and completely bury its body portion under the ground. Once it is completely hidden underground, the thing growing from its head assumes the camouflage of a plant, allowing it to defend its body from intruders. However, this is ineffective against herbivorous Digimon.

It is cowardly and digs a hole with its four feet and buries itself under the ground when it detects enemies. The sprout on its head is for the camouflage of a plant. It ultimately evolves into Tanemon (Mega). 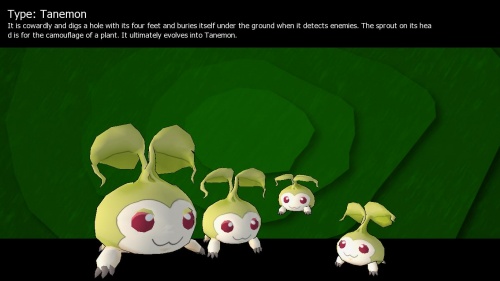