Syakomon is a Crustacean Digimon whose name and design are derived from the giant clam (Tridacninae) (硨磲貝 shakogai). Because he has developed the encrusted shell-like scales drastically, his internal structure and body is slime-shaped and is the size of an In-Training Digimon. He entices the opponent with his cute face, then attacks. Once his scales are closed up, his attack and defense are raised a little higher, making upcoming attacks bounce off him.

Syakomon was added to Korean Digimon Masters on January 14, 2014.

Syakomon was added as a Mercenary Digimon to gDMO with the March 25, 2014.

Can be obtain via Monster Card lvl 6 from MarinDevimon

Because it has developed the encrusted shell-like scales drastically, its internal structure and body is slime-shaped as it was an In-Training Digimon. It entices the opponent with its cute face, then attacks. Ultimately he evolves into Leviamon, one of the Seven Great Demon Lords. 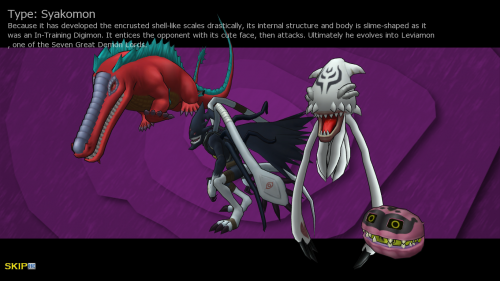