Sparrowmon is a Bird Digimon. It specializes in aerial battles and soars soundlessly at Mach speed. It is effective not only at speed but also at tight turns, and possesses the maneuverability to easily pull off a sudden turn. It is fundamentally someone that easily gets carried away due to its moodiness. Because the quality of its flying varies depending on how it feels at the moment, you can immediately tell whether its mood is good or bad, from whether it looks like it is flying well or badly. If it is performing highly difficult aerial acrobatics without even being asked, you can take it as being unmistakable proof that it is in high spirits. Sparrowmon's many extraordinary feats, too quick to catch with the eyes, are things that thoroughly capitalize on that maneuverability. The guns it holds in its hands are a set of twin pistols named "Zanahoria" (Esp: Carrot), made by Vulcanusmon, who produced their sister-gun, the "Berenjena" (Esp: Eggplant) possessed by Beelzemon.

Digimon specializing in air combat that can fly silently at hight speed. It does not just fly fast, it can also respond quickly and can male tight turns easily. 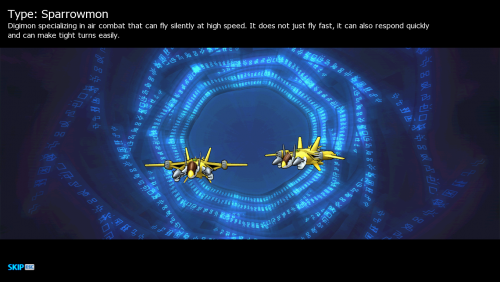