Shoutmon is a Mini Dragon Digimon whose name is derived from the sound of a "shout", and whose design is derived from a musician. It is a ferocious Digimon with extremely high aggressiveness due to its hot-blooded enthusiasm. However, it is friendly towards its comrades, and its friendship with other Digimon, surpassing species, can be deepened even further if they are recognized by Shoutmon. There is a unique feature to Shoutmon's singing that converts its passion to energy, and since Shoutmon won't give up fighting unless its passion disappears, this is the reason Shoutmon is said to be a ferocious Digimon with high aggressiveness.

On one hand it seems ferocious, but on the other it is said to love music and songs, and it likes to hum songs with natural sounding background music like the sound of the wind, raindrops, the murmuring of a river, or the stirring of leaves on a tree. Because it can often become too enthusiastic in its song, accidentally letting off its "Soul Crusher" even though there aren't any enemies, it's probably safest to leave the spot at once if Shoutmon starts singing, so that it doesn't notice you. Shoutmon itself is said to have the mysterious trait of always having its MacField-brand mic in its possession, and a Shoutmon without the mic is not really a Shoutmon.

It is said that a Shoutmon that has completely lost its mic will rapidly lose power from the shock of not being a Shoutmon anymore, and before long it will have wasted away. Therefore, you should never play a practical joke like hiding the mic. Incidentally, it can wield the mic as in bōjutsu, so it is excellent not only in scuffling matches but also in performances.

Shoutmon was added to Korean Digimon Masters on August 7th, 2013. 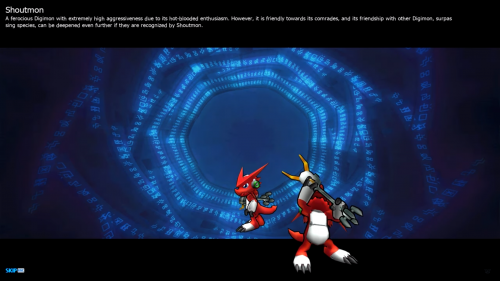