Renamon is an Animal Digimon whose name and design are derived from "Renard" (Fra: "Fox"). According to Chiaki J. Konaka's notes, Renamon was originally going to be named "Lunamon". It has the appearance of a golden fox. Renamon is a Digimon whose relationship with humans is expressed bluntly, so depending on how it was raised during its time as an In-Training, it is said that it can Digivolve to a Renamon of particularly high intelligence. As it is always calm, cool, and collected, it is practiced enough that it doesn't lose that composure in any situation. Its slender, tall appearance excels when compared with other Rookies, and rather than Power Battling, it makes sport of the enemy with various arts that use its speed.

A Fox shaped Animal type Digimon. One of the fastest Digimon. This Digimon was trained to remain calm under all circumstances. It will evolve into Sakuyamon, which is an acting representative of God's Will. 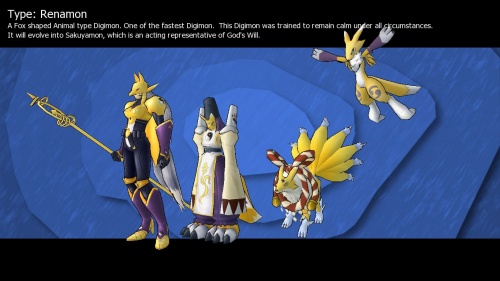