Raremon is a Ghost Digimon. It tried to extend its life by mechanizing its body, but it destabilized its body, and its configuration data has begun to break down to the point that all its muscles have rotted away. However, because it was given life by those machines, it will not die, and survives with this grotesque appearance. Because its body has broken down, its offensive power and mental capacity are nonexistent, and it acts on instinct. It gives off a foul stench from its entire body, so that Digimon up to the Rookie-level will simply run away, and will not be its opponent until they grow to Champion.

Note: Raremon is a special Digimon line for Transcendence System.

Raremon (Champion) was given the riding ability with the February 11th, 2020 Patch. 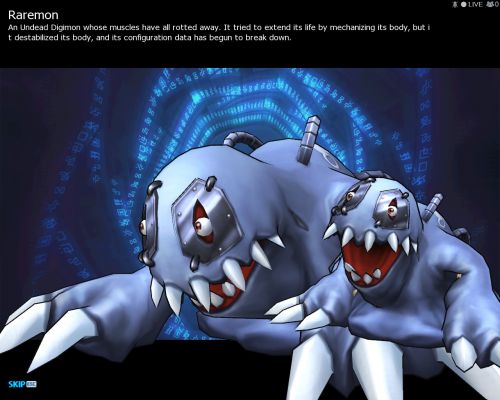