Mushroomon is a Vegetation Digimon whose name and design are derived from the mushroom. It is a tiny Digimon in the shape of a poisonous mushroom. It grows tiny mushroom bombs, powerful with toxins that induce every affliction, out of its body. If one gets hit with these mushroom bombs, they become unable to stop laughing, their body becomes completely paralyzed, all of their memories until now vanish, and they start showing various symptoms. As its personality is extremely ill-tempered, it loves to bully the weak, but it has a shy side, and always conceals half of its face.

Mushroomon was added as a Mercenary Digimon to gDMO with the September 11th, 2012.

A small vegetation Digimon in the form of a poisonous mushroom. There are small mushroom bombs on the body of the Mushmon, and getting hit by a mushroom bomb leads to various addictive symptoms such as paralysis or memory loss. 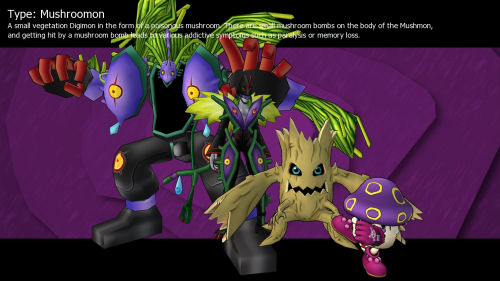