Kudamon is an Exalted Beast Digimon who is a redesign of Kudamon for the 2006 anime series, Digimon Data Squad. The redesign has smaller forelimbs and golden markings, and the Holy Cartridge is shrunk and attached to the end of its tail. Its collar is also changed into a Holy Ring. Its hind limbs are not always materialized.

Finish 12 Heavenly Generals quest given by MudFrigimon in Dats center (get every monthly title), scan received Mystery Extra Mercenary Digi-Egg (Event). Keep in mind that the chance of getting Kudamon is the lowest, chances are you won't get it at all.

A Holy Beast type Digimon in its growth stage with a transparent body. It has a stable and calm personality, and analyzes the situation even during battle and turns the tides. It ultimately evolves into Kentaurosmon with a sacred power generated from the earring on its left ear. 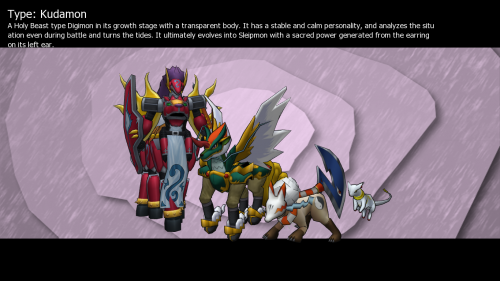