Hackom is a Mini Dragon Digimon. Its fur shines a cool white. Hackmon had encountered Gankoomon, who saw in it the makings of the thirteenth Royal Knight, and decided to temper the Rookie Digimon with frequent, rigorous trials, in order to pass on its own title as a Royal Knight to Hackmon. Its unfettered and restraint-hating, adventure-loving way of life is probably due to Gankoomon's DNA. It chases after Gankoomon and faces the rigorous trials it imposes with an air of composure. It has a masterful sense of combat due to its lineage, and because of its training with its chaperones, the Sistermon sisters, it can more than hold its own in battle against its opponents even if they're an Ultimate. It specializes in close combat that capitalizes on its keenness. It follows its dreams of becoming a Royal Knight like Gankoomon as it fights through continuous battles.

Hackmon was added to Global Digimon Masters with the April 4th, 2020.

Live in the way that is free, at will, and refuses to be bound. He also flexible in dealing with the harsh trials of Gankoomon. Even if the enemy is perfect form, they can fight in a same state, and he is the Digimon, who wants to be a Royal Knights like his master, Gankoomon. 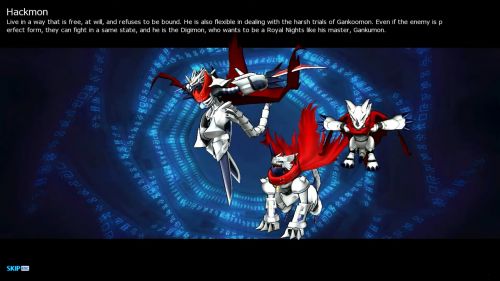