Gazimon is a Mammal Digimon. It is a Digimon with large, sharp claws. It is bipedal, which is rare amongst Mammal types; the claws on its forelegs likely evolved to allow its forelegs to be used as arms, therefore resulting in its bipedalism. It has an extremely aggressive temperament despite its small size, and it never warms up to humans. Although the claws on its forelegs are very effective at attacking, they are also surprisingly suited to digging holes, which it always does as it enjoys watching other Digimon fall into its pitfalls due to its mischievous personality.

Gazimon was added to Korean Digimon Masters on April 4th, 2013.

Gazimon was added as a Mercenary Digimon to ' NA DMO (formerly known as GDMO) ' with the June 4, 2013 (File Island Discovered! Part 2).

Can be obtain via Monster Card Lv7 from Chimairamon

A Mammal type Digimon that has sharp and large nails. It is a small Digimon, but very violent in nature, and does not ever try to follow humans. Nails on paw is very effective during attack, but also good for digging the ground and making traps. It ultimately evolves into Gulfmon. 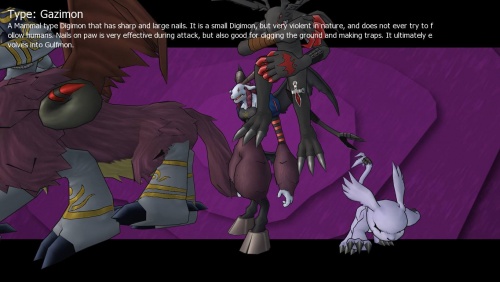 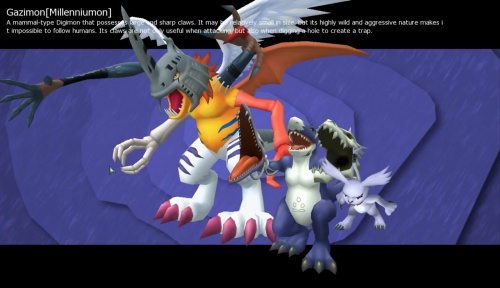