FanBeemon is an Insectoid Digimon and a carrier of the X Antibody whose name and design are derived from the wasp (黄蜂Huángfēng?). It belongs to the mysterious "aerial, covert honey base, Royal Base". Although its daily life differs from that of other Insect Digimon, it is a strong, dedicated worker due to its personality being so cheerful. It always gets along with Plant Digimon like Palmon or Lillymon. Because the base is usually under construction, it has the duty of carrying home data left on fields of flowers or vegetation, little by little, to use as raw materials, causing it to be classified as a Virus. Also, because the base is defended by powerful Digimon, making it impossible to approach, the goal of that construction is a mystery at present. It's wisest to just run away when it uses its "88 Call".

FanBeemon was added as a Mercenary Digimon to ' NA DMO (formerly known as GDMO) ' with the June 26th, 2012.

An insect-type digimon with a bright personality who is a strong worker. It is always on good terms with other plant type digimons like the Palmon or Lilymon. It ultimately evolves into TigerVespamon. 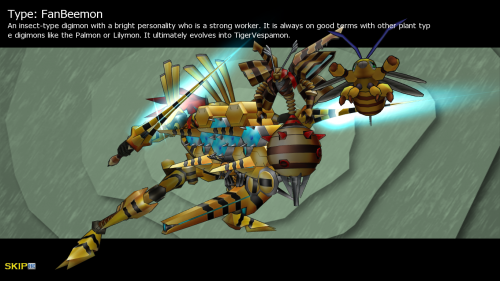