Dorumon is a Beast Digimon and carrier of the X-Antibody whose name is derived from "DIGITAL OR UNKNOWN MONSTER". Because it has an old-style interface on its brow, it has been conjectured to be an experimental "Prototype Digimon" from before Digimon were discovered. The personality of natural Combat Species Digimon manifests particularly strongly within it, so its combat instinct is high, and it often barks and snaps at everything, but it seems that it was tamed by someone it once bit. The data that is said to have been hidden within the deepest parts of its Digicore, during an experiment, is the potent life-force data of the legendary beast, the "Dragon", and it is said it has the potential to grow into a mighty Digimon.

Dorumon [RaptorDramon] was added as a Mercenary Digimon to gDMO with the December 18th, 2012.

Can only be obtained from Kamemon (Digicore Merchant) or Cash Shop.

Can be obtain via Monster Card lvl 7 from DexDoruGreymon.

Can only be obtained trough Angewomon's Attribute Shop, Versandi Terminal or Cash Shop.

An experimental prototype Digimon created before the discovery of Digimons. It has a strong fighting instinct and a wild personality. Its final stage of evolution is DexDorugoramon. 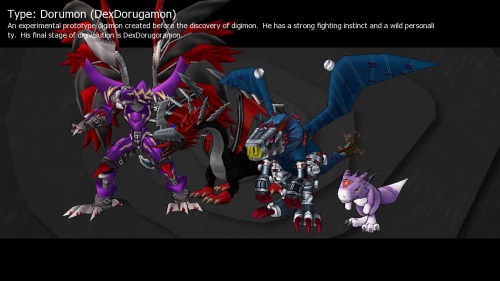 An experimental prototype created before the discovery of Digimon, this Digimon is aggressive by nature and tends to do things as it pleases. Its final stage of evolution is Dorugoramon. 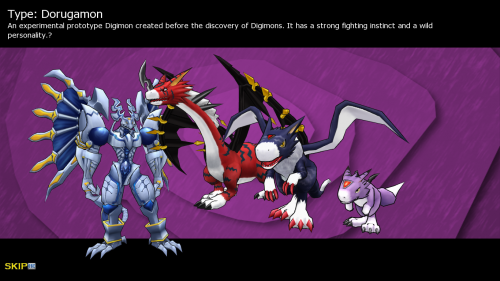 An experimental prototype Digimon created before the discovery of Digimons. It has a strong fighting instinct and a wild personality. It ultimately evolves into Alphamon. 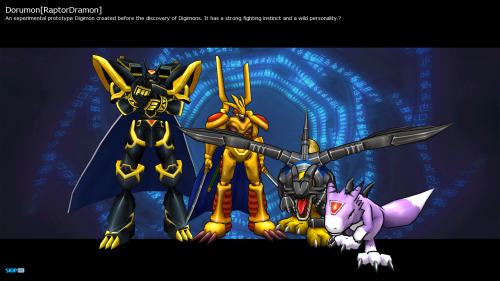