DemiMeramon is a Flame Digimon. A Digimon that digivolved from Mokumon, its entire body is ablaze due to how its Digicore burns fiercely for a body of its size. It has a wild temperament for its small size, causing its Digicore to burn intensely, but it cannot fight properly despite its aggressive personality as its offensive power is still low. Not only that, it is extremely weak to Water and Ice-Snow type Digimon, so it will flee the moment it encounters them. Incidentally, any relation between it and Meramon has not yet been made clear. It attacks opponents with small bullets of fire shot out of its mouth, but they aren't very powerful.

A flame type Digimon with small body size. Since the Digicore is burning furiously inside its body, it has appearance of flame. Ultimately, it will evolve into Boltmon, a Cyborg type Digimon. 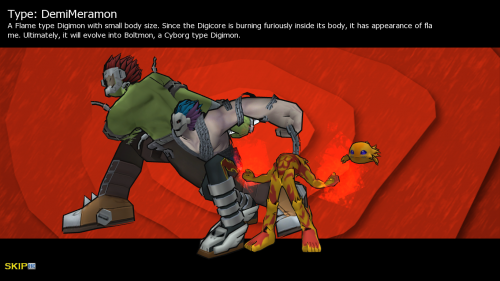 Cite error: <ref> tag defined in <references> has group attribute "" which does not appear in prior text.