Blitzmon is an Android Digimon and a Champion-class Hybrid whose Japanese name and design is derived from "Blitz" (Deu: lightning) and whose English name and design is derived from the beetle. A Digimon that possesses power of Lightning, which bears the might of legendary Ten Warriors. It has mechanical appearance contrariwise ot has warm heart. Its battle type is close wrestler style, and it is not good at underwater circumstance.

Blitzmon was added to Korean Digimon Masters on 2015.

Blitzmon was added as a Mercenary Digimon to gDMO with the December 22nd, 2015 Update.

Note: Spirits do not Digivolve, they have their own unique improvement system. 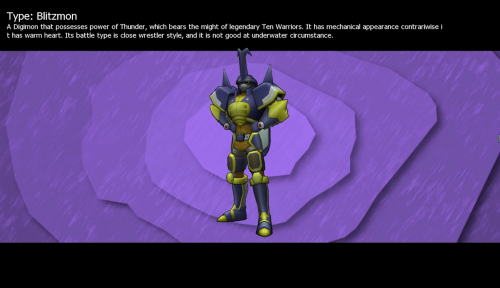