Bearmon is a Mammal Digimon whose names and design are derived from the Bear (熊 Kuma?). It wears its trademark baseball cap backwards. Although it is a little timid at first, it immediately becomes bosom buddies with other Digimon. However, once it begins to battle, with the uncommon physical strength and will-power it possesses—to continue battling no matter what kind of attack it suffers—it becomes a very reliable being. The ability for close combat hidden within its body is very strong, to the point that it bound its fists in leather belts so that its special punches wouldn't hurt itself. The text on its cap reads "BEARS".

A Beast type Digimon that looks like a small bear. Its trademark is its backward cap. It is slightly cowardly but becomes friendly with other digimons quickly. It has strong stamina and guts, and is very reliable. Its final evolutionary stage is DinoTigermon. 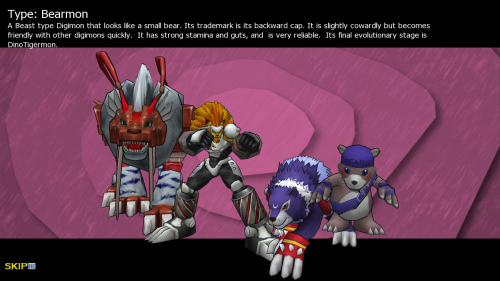