Ballistamon is a heavyweight Digimon that possesses bulky metallic armor and overwhelming power. It appears warlike at first glance, but because of its gentle personality, preferring harmony to conflict, it will never attack first. However, if it gets into a fight, it becomes a powerful and matchless fighter that swings its stout arms and wipes out the opponent.

With its heavy armor and great power, its potential for both offense and defense is great, and if it connects with a hit then it doesn't quit, although a single blow of its certain-kill attack, which capitalizes on its great power, is its specialty. However, its too-heavy body can be its ruin and there is a problem with its keenness, so it is not very good at fighting with fast-moving opponents.

Its "Heavy Speaker", which emits a low tone from the speaker in its belly and shatters the opponent, conceals the power to smash rocks and shake mountains, and the level of that power rises when it gets hungry. Also, the horn on its head, which becomes the essence of its close-combat attacks, is Ballistamon's pride, and it hates for it to be carelessly touched. Its "Horn Breaker", which heroically uses this horn to fling the opponent, is Ballistamon's Signature Move.

Also, Ballistamon is able to lend its heavy armor and power to another Digimon by changing into its "Enhanced-armor Mode".

Ballistamon was added to Korean Digimon Masters on August 7th, 2013. 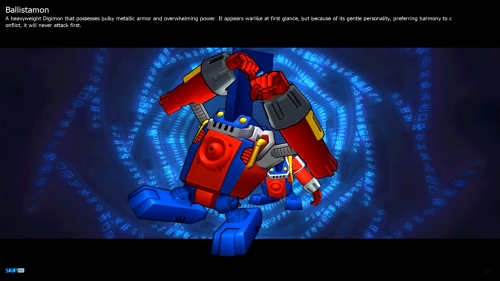